Sign up to receive Transform 66 Inside the Beltway project information by email. You’ll get the latest news, information and updates on the project’s progress.

What improvements are coming to I-66 inside the Beltway?

The 66 Express Lanes Inside the Beltway project is converting the existing lanes to dynamically-priced toll lanes operating during the morning (eastbound) and evening (westbound) rush hours. Tolls will increase or decrease based on the level of traffic. For the first time since it opened in 1982, I-66 inside the Beltway will be available to solo drivers in exchange for paying a toll. Commuters in vehicles with two or more passengers (HOV-2+) will continue to ride free. The high-occupancy limit will be increased to HOV-3 when the I-66 outside the Beltway express lanes open in mid-2022.

All toll revenue remaining after covering the cost of maintaining and operating the highway will fund multimodal improvements (e.g., bus, Metrorail, bicycle, pedestrian facilities or services, etc.) that benefit I-66 users.

Where does the project begin and end?

The project extends nine miles between the Beltway and Route 29 (Lee Highway) in Rosslyn.

What does the tolling project include and what is the schedule?

In summer 2016, VDOT began constructing the toll system, which will operate during the morning (eastbound) and evening (westbound) rush hours. The project involves installing eight toll gantries spanning the eastbound and westbound travel lanes of I-66 along with a gantry that spans the eastbound lanes of the Dulles Connector Road (to differentiate trips east of the Dulles Connector Road). Also, approximately 125 electronic and static signs are being installed along I-66 and approaching roadways. Following testing, the project is expected to be open to the public in December 2017.

How will the project benefit the public?

Dynamic tolling will allow enable traffic to move at free-flow speeds during rush hours.  All users will be able to experience consistent, congestion-free trips between the Beltway and Rosslyn. The project will:

When will tolling occur?

Under the current HOV hours, congestion spikes just before and after the restriction is in effect. To better distribute demand and reduce congestion, the hours will be expanded from 5:30 a.m. to 9:30 a.m. eastbound and from 3:00 p.m. to 7:00 p.m. westbound, Monday through Friday. The lanes will remain free to all users during the off-peak periods, including weekends.  Rush hour tolling Inside the Beltway will NOT be in effect on federal holidays:

Who will pay the toll?

Solo drivers will have the option of paying a toll to use the lanes in the peak direction during rush hour periods. The lanes will remain free for HOV-2+ vehicles (with E-ZPass Flex devices), buses, motorcycles and emergency response vehicles. When the I-66 outside the Beltway express lanes open in mid-2022, the HOV designation inside the Beltway will transition to HOV-3.

Will large trucks be permitted to use the lanes?

Large trucks will continue to be restricted from using I-66 inside the Beltway at all times.

What transportation options will be available for commuters who don’t want to pay tolls?

All toll revenue remaining after covering the operation and maintenance of I-66 will be invested in alternatives to driving alone, giving commuters more transportation choices than ever before. The Northern Virginia Transportation Commission will select and implement improvements such as upgrading Metrorail, improving local and commuter bus services and providing additional park-and-ride lots to foster the formation of carpools.

How much will the tolls cost?

Toll rates will fluctuate based on demand to ensure that toll-paying users experience free-flowing, reliable trips. Tolls will only apply during rush hours in the peak direction.

Who will collect the tolls?

VDOT will own, operate and maintain the 66 Express Lanes. After covering the cost of maintaining and operating the highway, all toll revenue will be devoted to funding multimodal improvements that benefit I-66 users, which will be selected by the Northern Virginia Transportation Commission.

How will tolls be collected?

Just as with the express lanes on the Beltway and I-95, tolls will be collected electronically via E-ZPass and E-ZPass Flex (which enables carpoolers to ride for free) devices mounted inside vehicles. When drivers pass under overhead gantries, their E-ZPass account will be debited in the amount of the trip. Drivers without E-ZPass devices will be mailed letters that invoice them for the cost of the trip plus a modest administrative charge. The letters also will urge users to acquire an E-ZPass or E-ZPass Flex.

What is the difference between E-ZPass and E-ZPass Flex?

E-ZPass Flex allows drivers in vehicles that meet the HOV requirement to travel for free during tolled periods by switching their device to HOV mode. When traveling alone, drivers are required to switch their device to non-HOV mode so a toll will be charged during tolled periods. Standard E-ZPass devices do not have a setting that allows drivers to select HOV mode and travel for free. Requiring the use of E-ZPass/E-ZPass Flex will significantly enhance the ability of law enforcement to detect and cite HOV violators.

Why and when will the vehicle occupancy requirement be raised from HOV-2 to HOV-3?

Raising the occupancy requirement will move more people in fewer vehicles, relieving traffic congestion and helping the region to meet federal air quality requirements. The change will occur in mid-2022, when the outside the Beltway express lanes open to the public as HOV-3. By 2022 additional infrastructure will be in place to support the formation of carpools outside the Beltway and additional transit and other alternatives to solo driving will be operational both inside and outside the Beltway.

The change to HOV-3 also will make I-66 consistent with the Capital Beltway, I-95 and I-395, which currently are designated HOV-3, as well as other HOV-2 facilities throughout the Washington, D.C metropolitan region that will be changing to HOV-3 in the near future.

Why is the clean-fuel vehicle exemption from HOV restrictions ending?

Retiring the clean-fuel vehicle exemption is a part of an overall strategy to treat all I-66 users more equally and to move more people with greater efficiency by encouraging greater HOV and transit usage. Approximately 40 percent of vehicles now using I-66 inside the Beltway during HOV hours are solo drivers and exempt clean-fuel vehicles comprise nearly half of the solo drivers. Continuing to allow a specific segment of solo drivers to use the 66 Express Lanes inside the Beltway would work against the goal of moving more people.

The clean-fuel vehicle exemption was originally established on a temporary basis, with the Federal Highway Administration requiring that it end if and when I-66 became “degraded,” or congested, per federal standards. Several stretches of I-66 inside the Beltway are now  congested during HOV hours.

Additionally, extending the clean-fuel exemption would increase traffic volume and result in higher toll rates for users in non-HOV, non-clean-fuel vehicles. Extending the exemption also would continue to treat owners of clean-fuel vehicle drivers differently and unfairly, because the current exemption only applies to vehicles with plates issued before July 1, 2011, an earlier recognition that the policy was increasingly causing I-66 to become congested.

Fuel efficiency for all passenger vehicles has increased significantly in recent years, further eroding the rationale for the exemption. Average new passenger vehicle fuel economy increased almost 33 percent between model years 2004 and 2016, according to the U.S. Environmental Protection Agency.

Will drivers heading to Dulles International Airport be exempt from paying a toll?

Like other solo drivers, those traveling to and from Dulles International Airport will have the option of paying the toll in exchange for using the congestion-free lanes during restricted periods. When toll collection begins in late 2017, the lanes will be free only for HOV-2+ vehicles (with E-ZPass or E-ZPass Flex devices), buses, motorcycles and emergency response vehicles.

What types of alternatives to driving alone will be provided?

The revenue stream generated by tolling I-66 inside the Beltway will fund a host of alternatives that will make it easier than ever for commuters to share their trip, thereby reducing overall congestion. Eligible projects include:

How will the multimodal improvement projects be selected?

The Northern Virginia Transportation Commission, comprised primarily of local elected officials, will plan and select the multimodal improvements. Projects will be proposed by Northern Virginia jurisdictions and will be evaluated and selected by NVTC, in coordination with VDOT, based on their cost effectiveness. Public participation and coordination with affected jurisdictions will be integral parts of the process of selecting the transportation improvements.

Toll revenue can only be used for improvements that:

NVTC will issue grants to and coordinate with agencies to ensure the efficient delivery of selected projects. NVTC also will monitor the effectiveness of projects and report to VDOT.

What is the status of the multimodal improvement projects been implemented?

The initial ten multimodal projects were selected for implementation by the Northern Virginia Transportation Commission and approved by the Commonwealth Transportation Board in 2016. The projects were funded with $10 million provided by the Commonwealth prior to the start of toll collection so that they can be in place when tolling starts. The projects include new and enhanced bus service, bus stop improvements, initiatives to make use of alternatives easier, bike-share programs and technology enhancements. Toll revenues will continue funding additional multimodal transportation improvements in future years.

For more information on the NVTC-identified projects and the process for selection, please visit http://www.novatransit.org/i66multimodal/.

Is I-66 inside the Beltway being widened?

A new lane will be added to a four-mile stretch of eastbound I-66 between the Dulles Connector Road and Fairfax Drive/Glebe Road (Exit 71), removing a chronic bottleneck that slows travelers and compels some to divert from I-66 onto surface streets in Falls Church and Arlington. VDOT completed a revised Environmental Assessment, which culminated in a “Finding of No Significant Impact” from the Federal Highway Administration in April 2017, enabling construction to start in 2018 and the lane to open to the public in 2020. Additionally, improvements to Exits 69 (Washington Boulevard/Lee Highway) and 71 (Fairfax Drive/Glebe Road) will further enhance traffic flow. 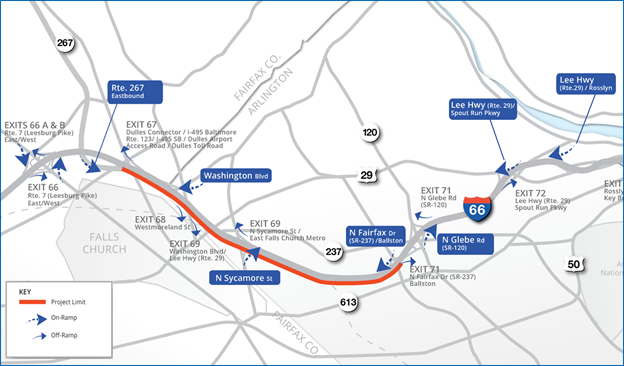 Why is I-66 inside the Beltway being widened?

In 2016, Governor Terry McAuliffe and a bipartisan coalition of lawmakers from both chambers of the Virginia General Assembly announced an agreement to move forward with widening a four-mile stretch from the Dulles Connector Road to Ballston.

Currently, eastbound I-66 is four lanes wide at the merge with the Dulles Connector Road. The interstate quickly drops to three lanes near the Great Falls Street overpass exit and then to two lanes at Washington Boulevard/Lee Highway (Exit 69). The abrupt reduction in lanes combined with high traffic volumes cause lengthy daily backups and diversion of traffic onto local surface streets.

Will toll revenues be used to widen I-66?

The widening project’s environmental analysis, design and construction are being funded with revenues from the federal Fixing America’s Surface Transportation Act (FAST Act) and state revenues, not toll revenues.

Will my property be impacted by the eastbound widening project?

The construction of the widening project will not require the displacement of any homes or businesses and will be completed largely within the existing right of way.

How will noise impacts be considered? Will new noise walls be built?

A preliminary analysis of noise impacts was carried out to determine areas eligible for new or replacement walls. The following graphic shows how the preliminary results affect deployment of noise barriers.

A final noise analysis will be completed when the design of the widening project is more refined.  The following graphic details how noise analysis is considered in the development of highway projects. 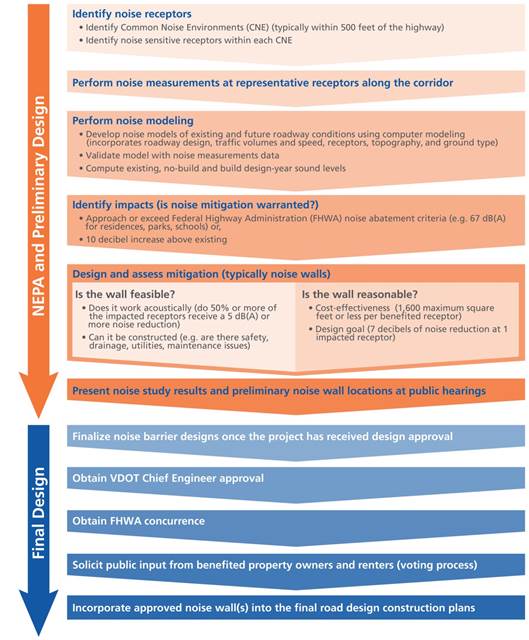 Will tolling cause drivers to abandon I-66 and travel on local roads? 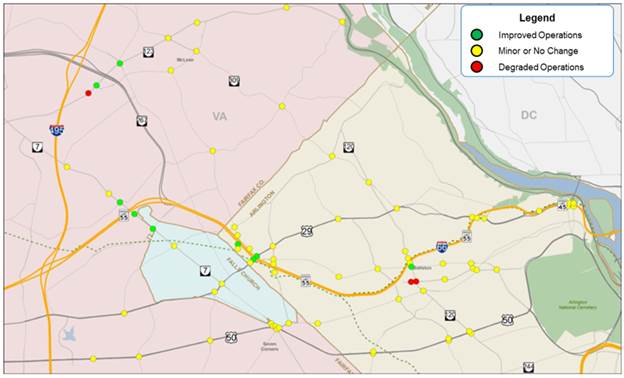 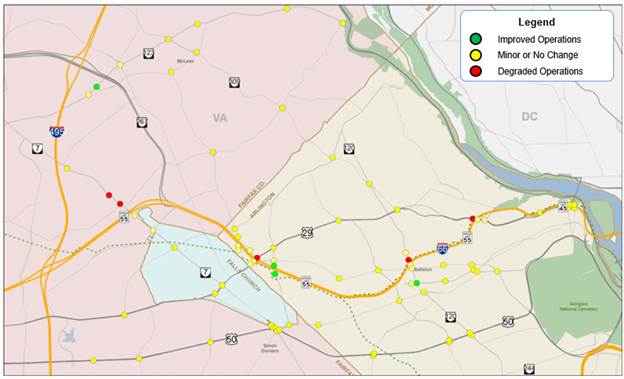 What is the best way to contact the project team?

We want to hear from you! Please regularly visit www.Transform66.org for the latest news on the project. If you have specific questions, please email us at at:Transform66@VDOT.Virginia.gov.